It’s been underway since last July, but now the Woodland United Way and United Way California Capital Region have consolidated into one agency, which will hopefully give the local group more power to serve nonprofits.

Now, the two agencies are in the final stages of collaboration, according to Stephanie Bray, president and CEO of United Way California Capital Region.

Bray told those attending the event that she respected the initial skepticism when the merger was first announced, but she also said “no one group” can provide all the resources needed today to provide financing and more to nonprofits.

United Way is an umbrella agency under which dozens of nonprofit groups can apply for and receive community funds. Rather than making individual donations to numerous groups, people, businesses or institutions can make a single contribution to the United Way, which will then disburse the money as needed to member nonprofits.

Bray said both Woodland and the Sacramento United Ways will soon be holding community outreach discussions to better engage those recipients. She urged people to stay engaged in the organizations, saying “We can bring our passion but we need yours.”

“The is a celebration,” of the work that went into bringingWoodland and Sacramento together, she said, “now, let’s roll up our sleeves and get to work.”

From a local perspective, not much will change. Offices will remain open in Sacramento and Woodland with Woodland United Way’s Executive Director Lori Ross overseeing Yolo County programs from its current location off Main Street in downtown.

In July, Bray said the merger “ensures we are using our resources wisely and efficiently as we work to increase the number of kids across our region who graduate from high school ready for success in college or career.”

The merger will continue the former Woodland United Way’s work to bring change in Yolo County through education, including its KinderCamp, Read to Succeed, Imagination Library and Woodland Kids Read programs.

Woodland City Manager Paul Navazio and John Purcell, senior vice president of Bayer Crop Science, joined United Way’s board of directors and a Woodland Community Advisory Committee chaired by Ruth Miller was created this past July. Miller has served on both United Ways’ boards and is a Woodland resident.

“Our region and our residents are already benefiting from the combined experience, expertise and resources of both organizations,” Miller said at the time. “I have seen how exceptional these two organizations have been individually, and I look forward to their work together to create stronger, healthier communities for families in Woodland and across the region.”

Speaking Thursday night, Miller reemphasized that message, noting that the missions of the two organizations is aligned and that both will be able to evolve as the communities evolve.

Both groups’ boards of directors approved the merger in November 2018 after a unanimous recommendation from a committee that included current and former board members, community leaders and staff from both organizations.

Serving Woodland and its rural communities, Woodland United Way was founded in 1968 and provides funding and resources to local programs that support education, children and healthy families. United Way California Capital Region serves Amador, El Dorado, Sacramento, Placer and Yolo counties. It was founded in 1923 and runs the Square One Project, a 20-year commitment to ending poverty in the region by helping students graduate from high school ready for college or career. Contact reporter Jim Smith at 530-406-6230. 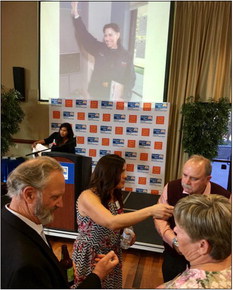 United Way Executive Director Lori Ross of Woodland talks with Mark Ullrich about how the local agency joined with the United Way California Capital Region. Board member Mike Jensen is shown in the foreground.

Click here to see this page in the eEdition: